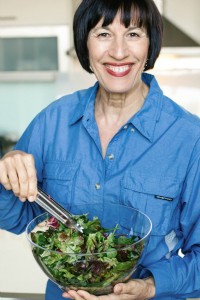 From fast food to fat loss, she has written, researched and talked about virtually every aspect of healthy eating.

She is an award-winning nutritionist and media food commentator, who understands the demands of today’s busy world and the complexity of food issues. She can cut through the clutter – so you know what to eat for dinner tonight!

The author of 10 books, her book Nutrition for Life has clocked up sales of almost 500, 000, making it one of the most enduring and popular nutrition books in the country. In 2012, she released her latest book Catherine Saxelby’s Complete Food and Nutrition Companion after two years of solid research.

She has written more than 2,000 articles on all aspects of food, fat loss and medical diets in a career spanning 20 years. She has had columns and articles published in magazines such as Super Food Ideas (founding
editor), Women’s Weekly, Who, Healthy Food Guide, Prevention and New Idea.

She is called upon for her opinion on food issues by radio and television and often appears on news and current affairs programs such as the Today Show, Today Tonight, Sunrise, Channel Nine News and Fox News.

She works with food producers, supermarkets and publishers to make healthy eating easy and healthy food, taste good. She helps these groups communicate better so that consumers can understand nutrition and put into practice good eating habits.

Aside from media commitments, Catherine delivers seminars and workshops to corporate groups as well as the food industry and health professionals.

Catherine holds a Bachelor of Science degree (majoring in biochemistry and physiology) and a Post-Graduate Diploma in Nutrition and Dietetics, both from the University of Sydney.

She is an Accredited Nutritionist (AN) and an Accredited Practicing Dietitian (APD) and has been an Honorary Governor of Sydney University’s Nutrition Research Foundation from 1993 to 2013.

She has undertaken additional courses in writing, media and communications, internet/blogging and marketing. She understands the systems of marketing food products and how best to communicate complex nutrition issues to the general public.

She practices Tai Chi and Pilates and has studied meditation under Western doctors as well as with Buddhist monks.

Catherine is a professional member of the:

In 2005, she was made a Life Member of Nutrition Australia for services to community education.

In 2009, she was made a Recognised Contributor to the media spokesperson program run by the Dietitians Association. She mentors younger dietitians to help them present their case in interviews. 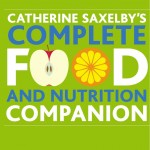 Complete Food and Nutrition Companion
Released in July 2012
Everything you’ve wanted to know from Acai to Zinc
including basic foods, ingredients, additives, hot topics and issues. Catherine has packed two years of work between the covers.
Winner AIFST 2014 Award for Best Writing in Food Science
Published by Hardie Grant Books

Everyday Diet Secrets
A pocket book full of tips and ideas
to inspire and motivate dieters
towards a healthy weight loss.

Eating for the Healthy Heart
The 10-step plan to
lower your cholesterol and protect your heart.

Foodwatch A to Z
Cut the confusion with Catherine’s handy pocket
guide to all those technical terms and additives
on food packs.